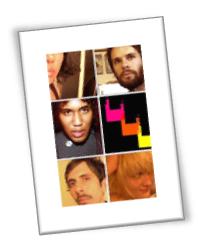 Black Kids, consisting of Reggie Youngblood (vocals and guitar), Owen Holmes (bass guitar), Kevin Snow (drums and percussion), Dawn Watley (keyboards and backing vocals), and Reggie’s sister Ali Youngblood (keyboards and backing vocals), formed in early 2006. Although they initially performed only in Jacksonville, they received national attention after a breakout performance at the Athens Popfest in Athens, Georgia on August 11, 2007, which led to a sudden flurry of coverage in the music press, including NME, Vice,The Guardian,and The Village Voice.The same month, Black Kids’ demo EP, Wizard of Ahhhs, was released via free download on their MySpace page. Soon after, Black Kids began working with Quest Management the company that manages Björk and Arcade Fire. In October, the EP received a favorable review of 8.4 out of 10 from Pitchfork Media, including a “Best New Music” commendation.

I have listen one of their song, titled ” im gonna teach your boyfriend how to dance with you”.I lenjoyed this song so much, the song is easy listening to me and if you guys in to it, download the song here. Its all free !!

Snapshots Of My Life